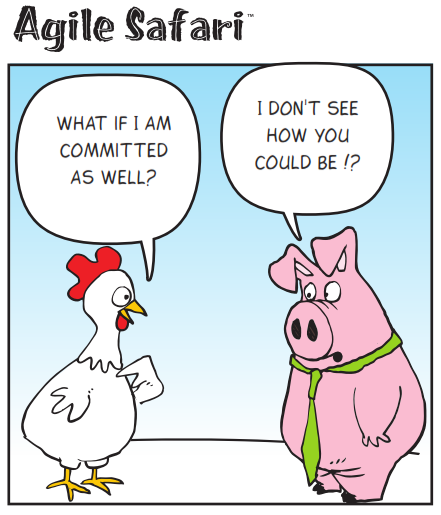 You may recall the conversation between the barnyard pig and his sister the hen: “You, my dear, are interested in the cause of breakfast;” said the pig, “while I, on the other hand, am committed.”

The old joke makes crystal clear the difference in meaning between two similar ideas; when you’ve committed to something, you’ve made a pledge that you will see it through to the end.  At least, that’s what Noah Webster tells us.

A concept closely related to commitment is conviction. At the other end of the spectrum from mere interest, conviction is a firmly held belief. The things that we are convicted of follow hard-won struggles on both intellectual and emotional fronts.

In that respect, our basic Christian beliefs are perhaps our most strongly held convictions. Most of us are permanently convicted of our faith because we each did the hard work to critically assess our Christian beliefs – or former lack thereof – to arrive at intellectual and emotional conclusions that convicted us of our need for the Grace-offering presence of an eternal and supernatural all-powerful, all-knowing, all- loving Triune God.

In turn, a Biblical worldview makes arriving at other convictions pretty easy. I know a guy who uses profanity too often when he speaks; particularly when he’s passionate about an idea, or when he’s around family or friends who don’t seem to mind (or, truth be told, who merely tolerate) such talk. Of late, however, people that I care a great deal about have asked me to address this social shortcoming, and I’ve taken up the cause with great zeal – and good results thus far.

Committing to curb the cursing is great – and I have on more than one occasion made such a resolution, particularly at the first of any given year.  But it wasn’t until recently that I was convicted of the dreadful sin.  The source of that conviction was a few dozen Bible verses, not least among them Colossians 3:8, “But now you must also rid yourselves of all such things as these: anger, rage, malice, slander, and filthy language from your lips.” Gaining a clear understanding that God despises “filthy language from our lips” has given supernatural fuel to my more temporal interest.

Without conviction to fuel the drive, we sometimes fail to see our commitments through. So what commitment actions derive from our convictions?

1) First, moral matters demand conviction. You don’t have to be convicted about everything – indeed, some of our convictions are really mere snap judgments or even strongly held opinions. Don’t care for provel on your pizza?  Fine, skip it; let others eat it. But, for every moral matter, you MUST take a side.

2) Be on the right side of right. Accordingly, when you do take a side, choose wisely. For moral matters, there is a single correct answer. This is your chance to separate what looks to be all grey into clear black tones and white tones – again, using intellect and emotion. Completely unpack an issue to the best of your ability with good research into all sides of a matter, and with the Bible as the ultimate arbiter. Then decide.

3) Once convicted, grow in it. Learn. Reinforce your belief. Find community to help you grow. You’ll notice that that’s exactly what church is all about.

4) Act. You are now accountable to something bigger than you: your God-ordained convictions. You don’t necessarily have to be an activist – but you must take personal action. For amoral matters, your actions are at the personal level. But for moral matters, you must go outside yourself; you must share your convictions, proselytize them and seek to compel powers and principalities to veer in the direction of your convictions. When said that way, it’s pretty heady stuff – but day to day, it’s as simple as talking to friends, boycotting a business or writing a letter.

Taking action on our convictions – making commitments and seeing them through – is tough stuff.  It takes guts, and it can be lonely, difficult work. But a final word of hope: as Jesus promised in John 16, we also have an ever-present helper – the Holy Spirit – who guides us in the convictions that undergird our commitments.  And that, I’ve found, is more than enough for any conviction I might have.

Jump in the convo! Cancel reply