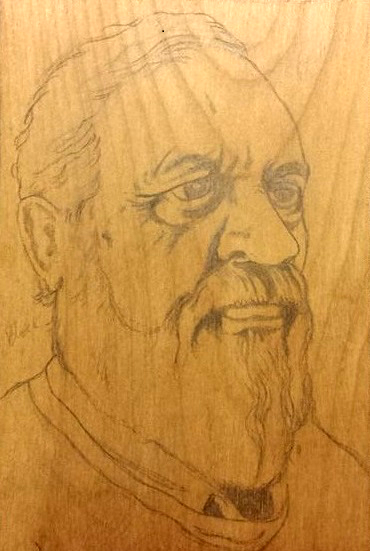 A Self Portrait of the Artist

My Dad, Georges B. Bishop, died Dec. 20, 2013, at 74 years of age.  Unassuming and sometimes curmudgeonly, he was also a noble gentleman and a scholar who was loved and admired by his family, friends and all who met him.  These sentiments are overdue for sharing, and are offered with love and admiration, in honor of his memory and of his life.

“What do you want to be when you grow up?” my Dad would ask me.  I don’t know for sure which of the two of us was so interested in the topic, but for as many times as we talked about it, at least one of us was.

“I dunno,” came my typical kid answer, as I twirled a wood pencil in my hands, trying to think of something cool to draw.  “Maybe a comic book artist?” I offered.  I started to draw something that might have looked like Spider Man.

“That sounds neat,”  he said, taking a draw from a Kent III cigarette.

At that point, my pencil went in its own direction, and Spider Man suddenly had a horn on his head.  In my anger, the drawing became another paper wad, flung hard to the floor with the others sent there earlier.  I thought about breaking my pencil, too, but I knew there’d be other drawings to make later.  So I just threw it to the floor, too, crossed my arms, and turned away.  I’d never be a comic book artist.  I’d never be any kind of artist.  Not like my Dad.

I sat and pouted, but no one bit.  So my mind wandered.

“I think I want to be a pilot,” I said.  I’m certain that I’d seen Top Gun recently.

“That sounds cool,” Dad said.  “You have to be pretty good at math, though,” he added.

“Maybe an architect?” I said.  That trip to our cousins’ in Chicago had made an impression on me.

Dad chuckled and exhaled smoke through his nostrils.

“You have to be good at math to be an architect, too,” he said.  “You want to be a lot of different things, don’t you?”

And then he passed on a tiny pearl of wisdom, borne of inspiration and experience.

“I think what you want to be is a Renaissance Man.”

Indeed, as he explained what a Renaissance Man was, I knew two things: First, that my Dad was already one.  And second: that I wanted to be one, too.

A Renaissance Man is someone who has mastered — and who effortlessly employs — a wide variety of skills,  This was the ideal person of the Renaissance period, which spawned “universities” to train all of its students to this standard: to have “universal” qualifications across many different areas of knowledge.

If Dad, who passed away in December, had written an account of his life, the book could have the same title as this essay: On Becoming a Renaissance Man.  He’d recount many of his life’s accomplishments, if not also a few adventures, and in doing so, he’d spell out the how-to-do-it that he did.  With only the lessons that he passed on by example, here’s the rough outline of the lessons of his life:

1) Be curious.  That’s how you get started down any given path — you are intrigued by it.  You look into it.  You ask questions about it.  You try it.  You get stuck.  You keep trying it.  You ask for help.  Then you do it.  You’re doing it.  You’ve mastered it.  You are it.  But it all started by FIRST being curious about it.  Dad had an insatiable curiosity, and you knew he was interested in something when he’d say, “Hey, that’s really neat.”

2) Be a lifelong learner.    When I left for college, Dad was at the age where he could get free cups of coffee at McDonalds.  I was the learner, he was the learned, defined as one who has already learned all that he needed to know.

That’s when he took a night class on wood carving offered by the park board.  To my knowledge, all he ever carved was his little version of the Travelocity Gnome.  But while he was there, he found out about a clock repair class.   Look around his home 20 years later, and you know where that took him.  A six week class to learn to carve in the round put him onto a path that arguably led to one of his greatest passions — and areas of expertise.  One curiosity led to another, and learning was the means of satisfying that interest.

3) Be somewhat OCD.  In the trades, they call it craftsmanship.  In manufacturing they call it quality.  In mental health, they call it OCD.  That’s what we called Dad, too.  But I don’t think you can be a bona fide Renaissance Man without mastering the various crafts you choose — indeed, after accomplishing one’s universal education, a medieval student would attend additional schooling where he’d “master” a specific skill — and thus, today’s master’s degree programs.

To be a master requires dedication and focus and continuous improvement.  You must maintain very high standards for yourself and your work and your finished products.  Clambering 25 feet in the air on a rickety aluminum scaffolding in the blistering summer sun, Dad used a heat gun and a putty knife to remove 120 years of layered, accumulated paint from every 2-inch board of siding.  He set and countersunk every nail.  He putty-filled thousands of nail holes.  He used the best quality oil-based primer and paint he could get.  Take a look at his masterpiece 15 years later, and it’s still held up to time.  His own minor Mona Lisa.  For Dad, call it OCD, but there was only one way to do things: the right way.  Which, as he’d tell you, was also his way.

4) Pace yourself.  You can do it all.  But even if you lean in, you simply can’t do it all at once.  Prioritize what you want to do.  Sequence things so you are building on other skills and accomplishments.  And as Dad sought to do, work to get some commercial wins to provide time-and-money capital for other less remunerative pursuits.

Looking back on my life thus far, and comparing it to his — there’s a list of skills, roles and jobs Dad performed at the bottom of this essay — clearly I’m no Renaissance Man like my Dad was.  But the lessons he left are widely applicable to all, whether you aspire to that standard or not.

There’s a final lesson from Dad, which I learned from his life post humously, that is necessary to any who would aspire to follow in his footsteps.  It’s this:

5) Get on with it, now!  While Dad lived a long life, and did some incredible things — created amazing works — there were still so many things he wanted to do.  He told of wanting to finish a few new projects.  At the end of his years, he selflessly cared for others, which was also one of his beloved Renaissance Man roles.  But his cataracts stole his sight, age took the steadiness from his grip, and cancer sapped his strength.  He had some unfinished business that tragically remains unfinished.

The lesson for each of us is clear: sharpen your pencil, get a new piece of paper, and get busy.  There’s a lot of life to live, but if you want to give it all your very best, and if you want to get everything you can out of it, then you’ve got to get on with living it.

And of course:
– Father

Other essays in honor of the memory of my Mom, Dorothy M. Bishop, and of my father-in-law, Jack G. Shannon, can be found at the links.

Deep Thoughts From the Shallow End of the Pool features essays from PR, business, and life — which means they might be as random as any of the rest of the content on this site!