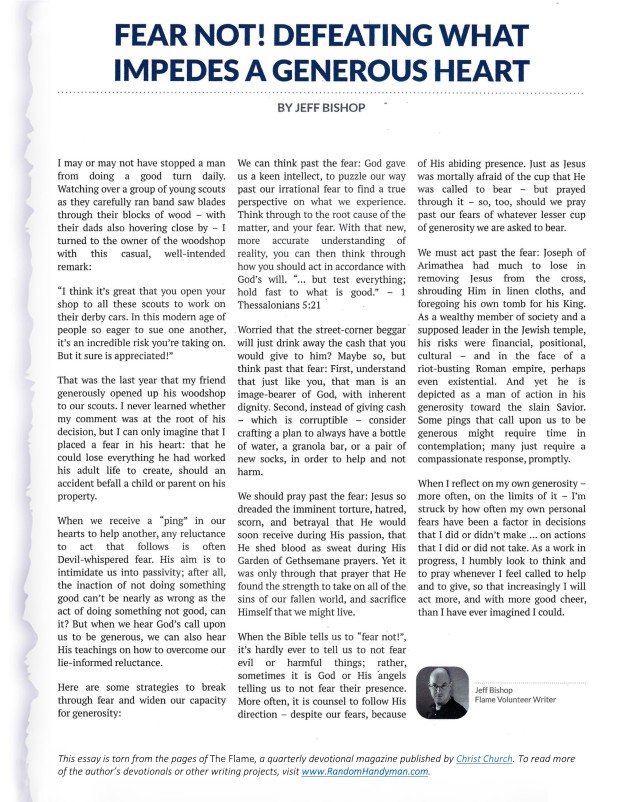 This essay is torn from the pages of the Fall 2018 issue of The Flame, a quarterly devotional magazine.

I may or may not have stopped a man from doing a good turn daily. Watching over a group of young scouts as they carefully ran band saw blades through their blocks of wood – with their dads also hovering close by – I turned to the owner of the woodshop with this casual, well-intended remark:

“I think it’s great that you open your shop to all these scouts to work on their derby cars. In this modern age of people so eager to sue one another, it’s an incredible risk you’re taking on. But it sure is appreciated!”

That was the last year that my friend generously opened up his woodshop to our scouts. I never learned whether my comment was at the root of his decision, but I can only imagine that I placed a fear in his heart: that he could lose everything he had worked his adult life to create, should an accident befall a child or parent on his property.

When we receive a “ping” in our hearts to help another, any reluctance to act that follows is often Devil-whispered fear. His aim is to intimidate us into passivity; after all, the inaction of not doing something good can’t be nearly as wrong as the act of doing something not good, can it?

But when we hear God’s call upon us to be generous, we can also hear His teachings on how to overcome our lie-informed reluctance. Here are some strategies to break through fear and widen our capacity for generosity:

Worried that the street-corner beggar will just drink away the cash that you would give to him? Maybe so, but think past that fear. First, understand that just like you, that man is an image-bearer of God, with inherent dignity. Second, instead of giving cash – which is corruptible – consider crafting a plan to always have a bottle of water, a granola bar, or a pair of new socks, in order to help and not harm.

When the Bible tells us to “fear not!”, it’s hardly ever to tell us to not fear evil or harmful things; rather, sometimes it is God or His angels telling us to not fear their presence. More often, it is counsel to follow His direction – despite our fears, because of His abiding presence. Just as Jesus was mortally afraid of the cup that He was called to bear – but prayed through it – so, too, should we pray past our fears of whatever lesser cup of generosity we are asked to bear.

When I reflect on my own generosity – more often, on the limits on it – I’m struck by how often my own personal fears have been a factor in decisions that I did, or didn’t make … on actions that I did or did not take. As a work in progress, I humbly look to think and to pray whenever I feel called to help and to give, so that increasingly I will act more, and with more good cheer, than I have ever imagined I could.

Prayer is that sole action that is most likely to affect change in the current events afflicting our society.

Pointed reactions following a recent tragedy temporarily put me on the defensive.

I was defending against criticisms of “thoughts and prayers;” that is, an inclination to hear those words as hollow and toothless in the face of tragedy. The nature of the event doesn’t matter, because increasingly, these attacks, usually railed from a secular worldview, follow every tragedy where this sentiment is expressed.

Setting “thoughts” aside, I was called to defend the act of prayer: ostensibly a religious expression by free people of faith. More pointedly, I was compelled to explain to a non-tolerant and self-misinformed audience that prayer is that sole action that is most likely to affect change in the current events afflicting our society. Not in the laws of our land, perhaps, but the power of prayer is in its unique capacity to move and improve the sin-stained hearts of a fallen humankind – a people inclined by their lesser nature to hurt, not love, others.

Prayer is that sole action that is most likely to affect change in the current events afflicting our society.

As I said in my response to these attacks: as believers, our prayers are the least we can do … and they are the most we can do.

However, as God would have it, with time, further reflection, and further prayer, I’ve come to appreciate that there is more going on with the issue at hand. Certainly there is deep and justified fear, concern, and frustration in the hearts of those taking gratuitous social media swipes at my well-placed prayers. But there is also a bit more to be considered in respect to how believers like me should think – and act – in these too-common, terrible situations where our thoughts and prayers are most urgently needed.

It’s possible / likely / probable / certain (circle your selection) that “thoughts and prayers” has been co-opted – by politicians and public figures who in fact may not believe in anything at all except themselves, and thus are too proud to deign to drop to their knees to pray to anyone, for anything. To the extent that this is true, then the expression indeed is the platitude that our philosophical opponents claim it to be. To the extent that this is true, such a platitude is a lie, of which believers should not want to be associated.

Unfortunately, this platitude has also become harmful faith speech. There is a whole catalog of well-intended Christian-ish idioms and catch phrases that believers tell themselves and others that simply are not wholly or even partially true – or can be less than helpful when delivered in the wrong context. Examples include, “God helps those who help themselves;” “whatever happened must be in God’s plan;” and “this certainly is God’s judgment for our (their) sins.”

Only recently has “thoughts and prayers” become hurtful, in part by our overuse of it, since suddenly there are so many incidents that compel our leaders to trot it out. Certainly also at root is the recent redefinition and politicization of the phrase by these others, such that in short order, it has become a comment that does more harm than good.

Instead of pledging “our thoughts and prayers,” our leaders might instead strive to be more precise, intentional, sincere, and sympathetic with what they say. For instance, what would the impact of our leaders’ testimony look like if they instead told hurting people, “I have prayed to God and I will continue to pray, for you and for everyone affected by this horrible tragedy, and for the evil person who perpetrated it upon good and innocent people.“

Would you think that doing so next time, every time, might be a game-changer for our culture? Better yet, what if these leaders were to simply pray, on the spot?:

“God Almighty in Heaven, an evil deed has been done against your will for this world, and too many good people are hurting right now – those directly affected, and those who knew and loved the victims well. But everyone who has learned of this tragedy is heartbroken – about the vile act, and for the unfairness of it all. Let your comfort and understanding fill your peoples and all of humankind in the days to come, and let us all strive together to bring this fallen world into your will, until your Kingdom comes. In the mighty name of our eternal Savior Jesus Christ. Amen!“

Prayer doesn’t start and end with our leaders at a podium or a press conference. While we can do more no more than pray – because there’s no greater power available to us for the asking – prayer is also the least we can do – taking only seconds for us to utter in a quiet, private moment. Yet how many times will we tell someone, “I’m praying for you!,” but we don’t ever get around to doing it?

We must pray often – but we must also believe in the power of these prayers individually and collectively submitted to the Lord. If we don’t believe this as believers, then how can we fume and stomp our feet when nonbelievers also don’t, and mock us accordingly?

But then, as James taught us, faith without works is dead (2:20). Granted, believers understand prayer to be an action verb – when we pray, stuff happens! But we are not a monastic order secluded in a mountaintop abbey, to commune with our Lord in isolation from a hurting humanity. Instead, we are God’s hands and feet. As such, when we pray, we should ask the Lord to show us his will; we must remain in prayer long enough to listen for his response; then we must heed that call: to rise from our knees, roll up our sleeves, and get busy getting his work done!

With prayer, if we don’t believe as believers, how can we fume and stomp our feet
when nonbelievers also don’t, and mock us accordingly?

For all people in creation, prayers remain the best way to align action with God’s will. By engaging God sincerely, humbly, vocally, and often – then listening to discern his voice – we can better fulfill his will. And more effectively than a defensive rant, we can better answer critics who would again attack prayer – bolstered by the power for change that it truly holds.